Quite a while ago I wrote a post about the portraits of Charlotte Bronte, speculating on how she may have looked.  The discussion was furthered by Mr James Grozny, owner of a mysterious painting he aquired at auction.  He speculated that his painting (which can be seen below) was by the artist Edwin Landseer and features the sisters Charlotte, Emily and Anne Bronte.  The research has been a slow, painstaking –  yet fascinating process and Mr Grozny believes he has nearly solved the mystery.  All can be explained in the comments and corrospondence over at Echostains (sister site).  Anticipating that a debate is ahead, I have decided to dedicate a page to this interesting subject and wish for all further comments to be posted here.  It’s a shame I can’t repost the comments here, but here are the last two to whet your appetite!  To keep up with the story from the beginning – please read the comments over on Echostains  from the original post;-

Did the Real Charlotte Bronte Just Stand up?

The Bronte sisters by Branwell Bronte

This is a follow up to my post called ‘Will the Real Charlotte Bronte Please Stand up? ‘ This was written a while ago.  I tried to establish what Charlotte Bronte really looked like (and didn’t get anywhere lol!)  This subject still fascinates me though, so I was intrigued to read recently that James Gorin Von Grosny from Devon had bought a painting whom he believes are the Bronte sisters, painted by Edwin Lanseer.  The connection with Lanseer and the Bronte’s comes about through Ellen Nussey’s brother being a friend of his. 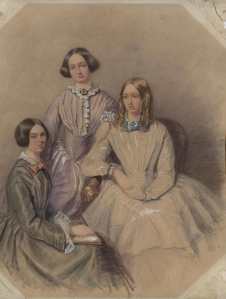 could this be a fresh portrait of the Bronte sisters?

Now, before you dismiss this claim as outlandish and unlikely, Mr Von Grosny puts up a formidable arguement  defending his claim and a lively debate is going  on the Bronte blog HERE.  It makes fascinating reading and  Mr Von Grosny addresses many issues regarding the work.  It is obvious that he has done a lot of research into the Bronte’s and has a genuine interest in them. 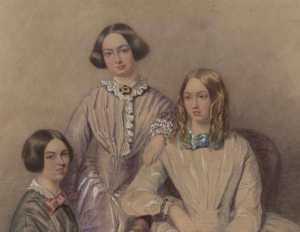 Even the way that the owner aquired this portrait is unusual in itself (read it HERE).  The whole story is intriguing and I am keeping a very open mind.  After all, we have so many portraits, each differing of Charlotte: so many conflicting descriptions of her appearence.  For example, even the samples of her hair differ.  I was at the Bronte Parsonage yesterday and saw three different examples, purported to be Charlottes hair.  There was a necklace made of fair hair, a mourning card with red blonde hair and a very dark lock of hair which is confusing. So why SHOULDN’T this portrait be of the Bronte’s? We don’t know for a fact it isn’t so far. 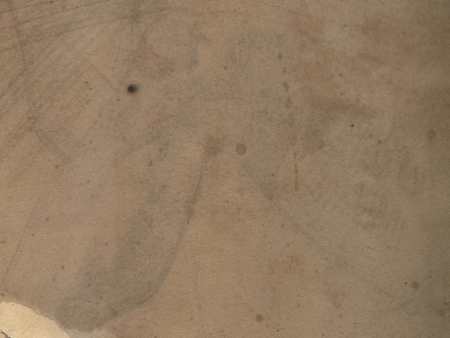 The reverse of the painting contains a sketch of a knee.  Mr Von Grosny asserts that this ties in with a painting that Charlotte did of a shepherdess with the same scar below the knee.  It is thought to be a self portrait.  There is so much to the story of this painting – the suspense is killing me lol!  But just because I WANT it to be the Bronte’s, won’t make it so, but evidence will.  I can assure you that Mr Von Grosny is busy collecting it!  This portrait has a tale to tell I feel, and I want to hear it!

18 thoughts on “Did the Real Charlotte Bronte Just Stand Up? The Debate”